This morning at 5 minutes until 9 a.m. my wife and I met my brother at the Parker Road Station train station. We all rode the surface rail to the Dallas Convention Center so that we could attend the Dallas Auto Show. The show opened at 10 a.m. Because the Saturday morning proved entirely un-crowded, we were able to easily inspect all the various cars. 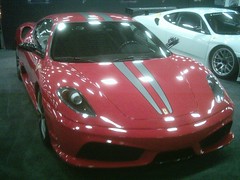 Although at a "green energy" festival last year in Plano, I saw all-electric offerings from obscure little companies, this car show featured mainstream manufacturers. Although we saw a few prototype cars, most of the offerings on display sell in the current domestic market. We enjoyed wandering from car to car. We ate needlessly over-priced hot dogs, scanned options and colors, and, hot-dog-scam aside, enjoyed ourselves quite a bit. The mood of the show seemed subdued but good-natured.

When we came home, I found myself falling asleep under my science fiction novel. I think that a wise course of action, because last night after we finished the wonderful film "The Conversation", I found myself unable to sleep. I visited the ambient internet radio site Stillstream,where the folks in the chatroom said "hi" and said "the show played one of your songs tonight".

Reading a science fiction novel about a war in outer space made me daydream once more that of a world in which people did one tenth as much gallantry in the cause of eradicating hunger and promoting justice as they do in the cause of capable self-defense--but maybe rather than daydreaming, I can become the change I seek.
Collapse