I can sum up what it is like to drive from Hartford, Connecticut to New Haven, Connecticut on a February afternoon in a mere 1,000 words: 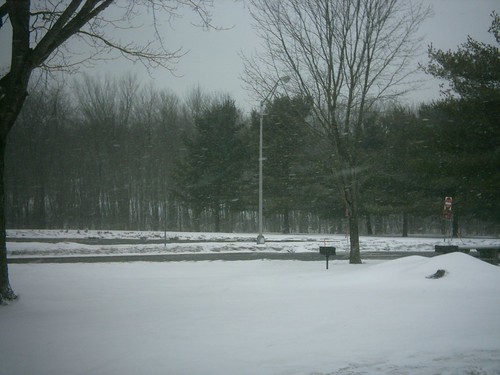 Yet life is like opening a box you got for Christmas, and forgot to open. Then, just before a business trip, you open the box. Inside the box you find three science fiction books, with a card. The card says "reading for your next business trip". You read the books as you fly, because you live your life as if books materialize for you when you most need them--and you enjoy them very much.

Tonight the Dallas County family court judges spoke to our little Garland Bar Association group. I practice almost no family law (because, you see, people weep during these cases). Yet I always enjoy these judges tell their views on practice and procedures in their courtrooms.

These things struck me, which are applicable not only in my trade, but also in a broader sense:

1. The judges pointed out that a lot of lawyers spend a lot of time attacking the other side's case on points that do not matter to the issues at hand, i.e., custody and property division. I thought to myself how so often people worry about hitting a home run instead of making sure they touch the bases. I was particularly intrigued by tales of lawyers who, given x amount of time to put on their case, squander their budgeted time on side issues, instead of getting their best facts into the record. My motto in these (and many other things): stop worrying if you're hitting a grand slam home run, and just touch the bases. Some folks never even set foot on the basepath, for fear they will not hit it out of the park. Some people are so busy swinging,they never try to hit the ball.

2. People rarely appreciate how much family court judges have seen it all, which leads all too often to people working overtime to put before the judge this soap opera fact or that soap opera fact. So often I read or hear of people miffed because their lawyer did not put on this lurid detail or that incredible affront--but the judges pointed out that the most effective lawyers are the ones that know how to put on the issues that matter rather than get lost in the side issues. How many work or hobby projects in so many walks of life that are dominated by silly side territorial issues rather than getting the job(s) done?

3. It's very hard for even lawyers who know better to avoid subtle (and not-so-subtle) gender bias in the way they phrase questions and statements.

4. In general, concise and crisp equals effective (a lesson I must remember).

5. When judges care, as these judges do, it makes a huge difference. It's not that they all saw things the same way--quite the contrary. But they cared, and that matters.

6. I could imagine, just for a moment, why people do family law.

7. The main problem facing the family courts is that nobody can afford a divorce lawyer, leading to all sorts of difficulties for all concerned. Texas needs to move towards streamlined pleadings and procedures--divorce papers should be, as in California, largely check-the-box. Most property issues involving wage earners are simple math problems which should be resolved as quickly as possible.

8. Sometimes lawyers need to learn that there are times to settle quickly--usually--but also times when an easy solution to a hearing (as in an application for an order which, if granted, can appear on one's criminal record) must be avoided, swords drawn, and the fight won.

9. People do far better working out family issues through lawyers outside court than letting lawyers do it for them in court in an aggressive trial in most cases. Sadly, people don't realize this.

10. Perhaps trial practice has as much to do with Joe Friday of Dragnet (just the facts, ma'am) as with
Perry Mason.
Collapse