I was born in 1959, in the waning days of Dwight D. Eisenhower's presidency. I therefore grew up with 1960s television. In my town, we could use an antenna to receive the three main channels--ABC, NBC and CBS, as well as the PBS station. I have many media stories to tell, being a fan of media in general and television in particular, but today I am all about the ads.

We got the greatest ads when I was a kid. Red Ball Jets tennis shoes were not just hip shoes--they made you "run faster and jump higher". A slinky was not just a bit of coiled wire, but instead the star of a jingle in which "for fun it's a wonderful toy [or a heckuva toy, I can't remember which]". The voice-over "from Wham-O!" heralded a great new device, whether it was the legitimately cool Wheel-o (not much more than a roller on a hand-held metal track) or an odd device that amounted to a plastic tarp which, when watered with a garden hose, permitted one to slide upon it, with only a reasonable chance of painful rope burns.

These ads and toys were all wonderful, and in particular wonderful in that the toy always turned out to be pale shadow of the ad--with one exception. Sure, the Thingmaker let you make plastic things--but it also caused global warming, burned your hand if you touched it, and smelled like a plastics factory in a particularly collective section of the second world. The EZ-Bake oven used a light bulb to let you make cupcakes so thin that your dog might not find a morsel for eating. Red Ball Jets neither facilitated high jumping nor speed sprints.

Yet the one exception swallowed the rule like a chipmunk gorging on a golden California poppy. This device was called a Super Ball! It looked a little like this artistic rendering: 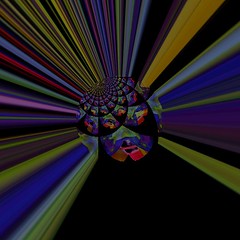 The ads said when you bounced it on the pavement, it went way high. It did! It bounced uncontrollably high. If one were not careful, then it bounced into a local window, creating fascinating sound samples not only of breaking glass but of irate neighbors.

The superball was fun, no doubt about it. All you needed was 4 miles of completely bare smooth pavement upon which to bounce it, which nobody had. But if anyone could have had that much open, paved space--why, then th sky would be the limit.

My new goal is to strive in life to be as fun and honest as a superball. 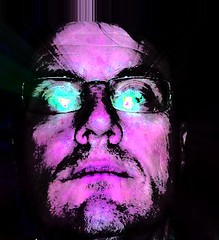 As I type this, the winter storm creeps its way into Collin County, with the temperature dropping just as the rains accelerate. We closed the office early this afternoon to let everyone drive home before it arrived, but at nine p.m. it barely has begun its arrival. Fort Worth, to our west, has congested, iced roads. But we'll see if it really matters much to us.

Lately I have been more about twitter, facebook and last.fm than usual. But I love the way that every social medium has its own flavor. LiveJournal tastes different to me than the others.

My wife and I stopped by a candy store in the mall the other day. I thought of

laruth's recent first visit from her home in Oz to the western USA when I saw it stocked exotic colors of M & M. I felt foiled when I bought a pack of candy cigarettes and they turned out to be candy cigarette-shaped chocolates.

I've been playing with my new 30 dollar camera, a 4 megapixel job that fits easily in a palm. All the manual's directions are in Mandarin, so that I have to guess what the symbols mean on the camera. Fortunately, the screen phrases are in English. I figured out that "hourglass goes on perpetual and display screen turns a pretty blue" means "battery needs a charge".

I had fun morphing my photo in a photo editor tonight. Today was Mozart day on the local classical station. I liked the Prague symphony, which certainly beat listening on the other public radio station to Mr. Ira Glass make me feel guilty for not yet pledging. I am attracted lately by the music of Gorecki. I must figure out which version of the 3rd symphony to buy.

I have a 14" long Meade rich field 2.4" telescope coming in the mail--an eBay purchase which cost shockingly little. I hope I can see craters--and kingfishers.