Tonight I confess a personal flaw and weakness.

I have one of those mild fits of pique this evening. You know, the kind of pique that is really inexcusable when one is living in comfort in a world in which most people do not live in comfort.

The source of my pique is simple. I spent time tonight having to explain to someone the advantages of something for which I should not have to explain said benefits. This is not a big deal. I explain things to people all the time. It's really, in many ways, what I do for a living.

But this time, for reasons which would be obvious if I wished to explain them here, it bugged me. Here's the Cliff's Notes version:
"When you write me to ask me to do you a favor, don't look the gift horse in the mouth when I agree to do you this favor. Further, when you write me to ask why the favor has a particular condition, in ways which make it clear that you knew nothing about me when you asked the favor, then don't write back again, asking me to sell you on why I should do you a favor. Also, if you imagine a favor has a particular condition, which it does not, and I explain that to you, it might be best not to continue to ask why the condition attaches". In other words, a lot like all the pride parts of the Shakespeare play Coriolanus, with fewer tunics.

See? It's all a bit silly. Almost like LJ-drama. I haven't really had much LJ drama in a few years. I don't miss it.

I have 3 observations:
1. Life is too short;
2. Almost everyone is more obsessed with themselves than anyone could imagine; and
3. when you get frustrated, just look at this face: 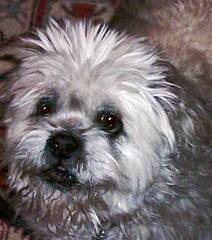