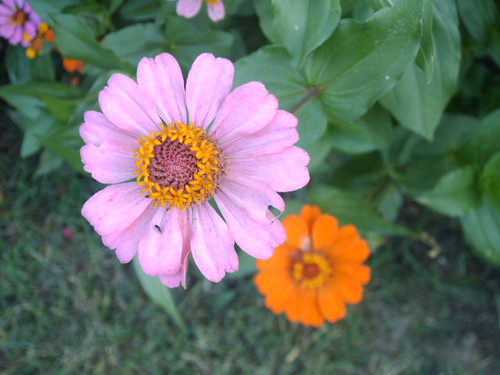 Flowers in our Glover River Garden, originally uploaded by gurdonark.

"Nothing is better than music. When it takes us out of time, it has done more for us than we have the right to hope for. It has broadened the limits of our sorrowful lives; it has lit up the sweetness of our hours of happiness by effacing the pettinesses that diminish us. It brings us back to the pure and the new."--Nadia Boulanger

I spent Thursday in the Venice Whaler grill in southern California, just down the way from the Venice Pier, discussing music, and in partiuclar open source/digital music, with Lucas Gonze, whom I was pleased to meet for the first time after having traded weblog comments over the past year or so. Lucas has designed some cool things that significantly advanced the ability of people to use music on-line, such as the XPSF player. I am interested in his Soup Greens project, in which he plays 19th Century public domain guitar pieces, and makes them available for free download under Creative Commons licenses. This variant of "song-catching" is a way to preserve the store of fascinating 19th C. guitar music, which includes some cool waltzes, some interesting marches and more than a ballad or two.

I enjoy meeting in person someone whom I have "met" via weblog. Words are such funny things. So many more fit into a conversation than fit into a weblog comment or a twitter "tweet". It was great to exchange ideas about how to play a part in creating a "sharing culture" for music. Lucas was a good fellow.

During my short business trip to Los Angeles, I remembered to bring the little chord necessary to attach my mp3 player to the rental car stereo. I am not sure why I have procrastinated so long in getting a car stereo with an mp3 aux jack, but I must remedy that. So many songs sound so much fun when played in a car stereo instead of through earbuds.

On the plane home this afternoon, I read the entirety of Miranda July's latest book of short stories. I found it a very interesting read. It's a reminder that we live in a seemingly directionless world of trouble and woe, in which whimsy and grace are our best defenses. I enjoy Ms. July's use of juxtaposition and misdirection, which somehow comes out "winning" more than "too cute" almost all of the time.

From the airport, I drove straight to the Samui Thai restaurant, for dinner with my wife and our friends. I listened to the 801 live album, one of my favorites lately. I like the sequence which includes "Miss Shapiro", "You Really Got Me" and "Third Uncle". I am pleased that I can do most of the staccato lyrical runs, which is almost as good as knowing Dutch or the macarena. The Paluxy River sits two hours' drive southwest of our home, in a land of small trees and gently sloping hills
known as central Texas. The Paluxy flows a bit in winter, and subsides to a largely charming shallow sheet of flow in the Summer.

When the Summer waters subside to a gentle sheet of transparent joy, the dinosaur footprints are most visible.
Three kinds of dinosaurs inhabited this riverbed and left their prints behind. One was nearly as large as a brontosaurus, and left round-ish footprints like a post-hole digger's assistant auditioning for a part as the Sinclair dinosaur in Ghostbusters IV. One was a thirty-foot-long carnivore who no doubt answered to the name "Spike" and left rather menacing large sharp toeprints which vagely called up memories of Tweetybird run amok.
The diagram of the third one posted in the ranger station assumed what I interpreted as a rather puzzled attitude, rather like a Benny Goodman fan just soaking in her first listen of Sun Ra when she realizes that comet is about to obliterate Guatemala, and touch off a sub-prime climate and investment crisis.

My young friend and I waded the very shallow Paluxy, where small fish nibbled at our toes while songbirds sang. We watched vultures fly, and crossed a genteel old metal highway bridge over the larger Brazos River, where we could look down and see dozens of people engaged in float trips on this river better known as a star of so many western movies than as an inner tube mecca. We ate bbq at the "Ranch" place in tiny Glen Rose, population 2,000-ish, which proved delightful, and looked for fossils in stray ground rocks.

Because we arrived before the Smmer heat turned oppressive, and departed before noon, we had a perfectly charming time. There is something very affirmative to be said for wading in a river looking for allosaur-ish
footprints. We did not stop at the nearby Creation Evidences Museum, where human footprints next to dinosaur footprints are displayed as flawed "proof", nor did we take the time to see lovely Cleburne State Park, a gorgeous lake with a small park where I have spent many happy hours in the past.

What does one say when everything is lovely and every prospect pleases? I tend to say "what a good time!".