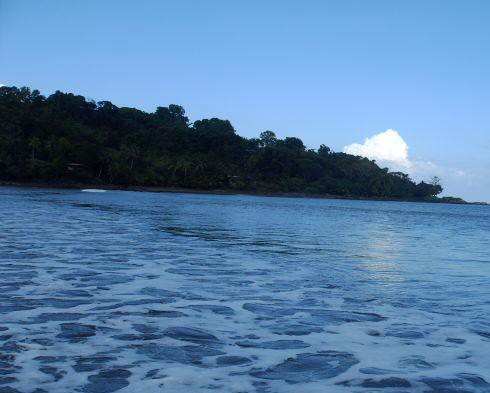 Last night I enjoyed watching the DVD of Amazing Grace until the moment I woke up and realized I had slept through most of the film, until the closing credits. I am glad we left a weekend after our vacation open for just this kind of decompression.

I dislike the way I behave when I am thoughtless. Yesterday I was at our local little French bakery, shimmeringly named "Voila!", ordering a sandwich. For some reason the little place was as popular for lunch as a hound dog at a tick convention, yet the counter attendant kindly let me know that the sauerkraut I wanted on my sandwich was not mere sauerkraut, but a sauerkraut ruined by Thousand Island dressing. I corrected my order to delete the "sauerkraut", but I was too thoughtless to say "thank you very much!". I will work on this, as a failure to appreciate retail folks is to me an unsavory behavior.

I bought a little Costa Rican flute for six dollars in the airport gift shop in San Jose, which is actually fun because (a) unlike most such things, it actually makes a sweet sound, (b) it is festooned with a little blue dolphin, a red sunset, and "hecho en Costa Rica", and (c) it served its effective function of allowing me to create a seven second sample for my softsynth, Sawcutter 2.0.. Although their breathy quality makes an impact, simple flutes and recorders make wonderful samples for the synth, while other things do not do so well.I think the difference is modulation and what I believe is called "vibrato". If the sample is anything but a simple note of simple melody, then it is more problematic to sample effectively.

Yesterday one of my remixes was featured on an interesting podcast billed as "Japan's first" called Tokyo Calling, while I had fun using a sample of a kalimba to execute a quiet and pretty keyboard melody for a simple free verse love poem about Summer that someone had posted at ccmixter.org.

The Super Bowl is today, but it does not interest me too much. Super Bowl Sunday is an interesting milestone at the Sunday afternon Weight Watchers. It usually marks the Sunday when the post-holiday religious fervor to join the weight-loss brigage is replaced by the first torpor of settling back into "normal life". The painted ponies go up and down--and all that.

Speaking of personal choices and possible errors, I posted on eBay a number of miniature mp3 players I bought at ubid.com for what I thought was a bargain but which, due to ubid.com's high per-item shipping and handling, proved only to be a reasonably mediocre purchase. I listened to a podcast this week about how people are hard-wired to self-justify, so I will cut against my hard wiring and say I made a mistake in buying the mp3 players, and now will triage to cut my losses. Granted, I could have cut my losses via return and a
restocking charge, but I did not want to deal with ubid.com on this.
I may buy from them again, but I will learn from this mistake in future dealings. I do not like this aspect of their business "model".

Sparrows love our feeder. I love watching them eat. It's a nice combination. 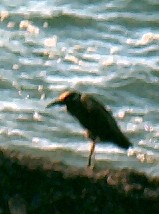 Heron by the Ocean, originally uploaded by gurdonark.

I hope you are doing well. Let me express once more my appreciation for the way you serve as a combination bulletin board, music and concert guide. I think it's impressive that a big corproate behemoth owns you and yet you still remind me a bit of the early days of BBS systems. Are you going to be hanging out with the Wall Street Journal any? I'd love to see you educate large corporations in how to discover cool bands, or, on second thought, maybe I would not like for that to happen.

Let me get to the point. Remember when I was in Costa Rica, at that hotel with the funny casino where instead of a roulette wheel they used a squirrel cage of numbers? I stilll wish I had bid 1,000 colones there. Yes, that one, with the empty hotel restaurant with top notch service and food from Heaven, up in the mountains.

You spoke to me then, and asked me a good question. You saw where I was sitting, and asked me if I wanted to try out Myspace in espanol.

I know that my Spanish does not go far past "Quisera dos enchiladas, por favor" and "Donde esta la panaderia, por favor?",but I am fairly certain that the Spanish word for "no" is "no". SoI clicked "no".

Yet each day you greet me with a charming Spanish page when I log on. I think your accent is no better than mine. We neither of us will be true ticos. It took me three tries to figure out how to buy the tarjeta de telefonicos during my last trip.

I believe in religion, science, and Google. I have tried every trick they suggest for how to return me to the Texas English of my birthplace.
I grant you that I was born in San Antonio. Please, though, could we speak English once more?

Spanish is for me a wonderful thing, a mystery, and a future resolution. But isn't Myspace my space?