Last night the earth mysteriously warmed. When I went to a business appointment in the afternoon, the palpable chill gave me that TV-dinner-pre-thaw feeling that both promises and withholds.

As we emerged from our small Toyota automobile at the "Under New Management" Japanese and Thai restaurant last night, we walked into a world which had not entirely forgotten Summer, but instead keeps it on the hovering edge of consciousness, like red pansies in bloom in the snow.

The Weather Channel, sage in its advice notwithstanding a fixation on the phrase "the upper Midwest", advises that a cold front, which I imagine would be named Iggy if cold fronts got names in the same way that hurricanes do, is heading our way in a barrel that would make Niagara proud.

Today, though, like a decanted red wine, the air breathes a certain call to home, to hunt, and to harvest. I am not a hunter--other than the platonic searchings of a pleasingly coarsened heart--but I can harvest a hike under awe-struck clouds, and perhaps snap a picture or two. Today I have listened to sound effects at the Freesound Project such as Moroccan farms and sonar pings. I am in a frame of mind for late June in December, just prior to January in December. 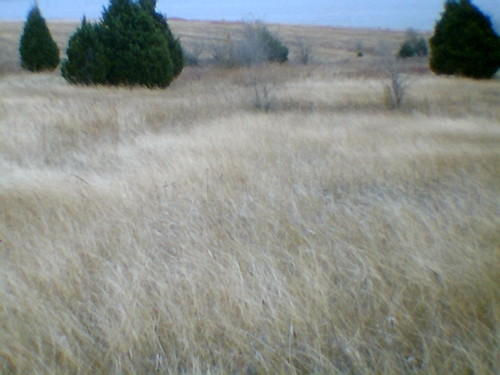 My local favorite, the Trinity Trail, is but a few miles outside Allen, near the town of Lucas, Texas. From the earliest Spring to the latest Autumn, I like to see the weekly transformations along this simple lakeside hike.

When I arrived today, laden with cameras and mp3 player, two horse trailers were in the parking lot. When I began to hike, I found that many of the grasses and flowers had yellowed into the oncoming winter, though the temperature outside was warm in the San Francisco sense. I loved to watch the grass wave, in a way similar to the green grass at the Antelope Valley poppy preserve in southern California.

I walked the trail down to Hiker's Point, passing a number of incredulous cows, indifferent crows, three horse riders ( in pleasingly non-lethal doses), a great white heron, a number of seagulls in flight (apparently eschewing New Age rhetoric in favor of a patter that might be at home at an auction or circus), and cormorants sitting on bare trees submerged in a huge lake.
I saw cedar berries, tiny yellow flowers, and cedars standing like stark holiday trees against a relentless Great Lake of waving brown.

I took video, as well as a number of pictures with my 3/10ths of a megapixel Mikona "fun" digicam. I love the almost lumiere indistinctness of this inexpensive camera. I loved the sound of downtempo electronica on my mp3 player, such as Henri :Pettersen's "Traveler" album and the vim and zip of a number of Cagey House songs.

When I got home, I went into our back yard, and through vigorous pick-up effort made our yard seem somewhat less like a yard inhabited by two charming dogs. I also took the two charming dogs for a walk around the pond, in which they delighted.

Tonight we went to see "Enchanted", which was a pleasant surprise.
I also got to eat a small gingerbread man and a pleasantly proportioned salmon.

I finished a remix which features four samples from Bucky Jonson, the back-up band from the Black-eyed Peas gracious enough to make their samples available at ccmixter for remix, as well as thirty samples from the freesound project. It's a bit busy, in the way that
pure fun can be busy.

I titled the remix "Moodle", in honor of by Sam Renseiw, a Copenhagen fellow who uses my music, in unaltered or wonderfully mashed-up form, to accompany blip.tv pataphysical videos. I love whimsy and the absurd. Sam calls his videos "voodles", for "video doodle", so my song was "Moodle", because I found samples at random and blended them into the song to create a pleasing juxtaposition. Life is there for the taking, if only one blends in with flair.