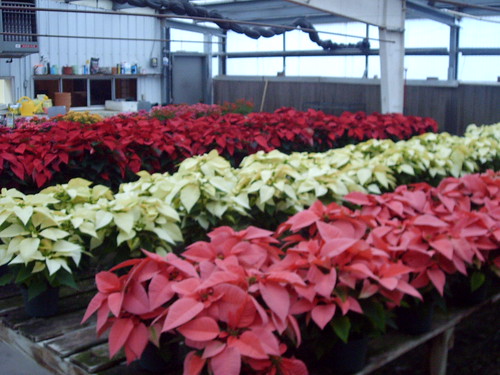 On Farm to Market Road Number 543, where McKinney is turning into Weston, Crump Gardens stands just off the farm road. It's one of those places that serves the function of both a nursery and a kind of florist shop.

Every Sunday after Thanksgiving, Crump Gardens displays tens of thousands of blooming poinsettias. I stopped by this afternoon to
snap some pictures, and to purchase a holiday Kalanchoe plant.

I learned this afternoon at Weight Watchers that I lost 1.8 pounds during Thanksgiving week. I also worked up a charming remix in which a minimal keyboard melody is accompanied by the sound of trees on the Skerwink Trail on Trinity in Newfoundland, as well as by crickets in Ain in France.

I titled the song "Lonely for Home", and I found this quotation to accompany the piece, to capture the intended mood:

"The calm of the fog dulled the mind. Fishing so lonely, they hummed
home songs, so as not to scare the fish away. Ideas came more slowly and seldom; they seemed to expand, filling in the space of time, without leaving any vacuum. They dreamed of incoherent and mysterious things, as if in slumber, and the woof of their dreams was as airy as fog itself".--Pierre Loti, translated by Jules Chambon.