Last night our tea kettle began to whistle, signaling that the boiling water for my wife's tea was ready. I managed to get a pretty fair recording of the sound, which I'll upload to the Freesound Project. I hope the listeners enjoy the punctuation of dogs barking at me for attention amid the steamy whistles.

Tihs morning I ran across the Canadian public radio program Spark, which covers technology in modern life. Its October 10 and 13 episode uses two of my remixes, "Snow Geese at Hagerman Wildlife Reserve" and "Restless Sleep", on the soundtrack for its stories. "Snow Geeese at Hagerman Wildlife Reserve features a re-processing of my kazoo version of "We Wish You a Merry Christmas" from the lower-than-lo-fi kazoo christmas album I sent out to Livejournal friends some years ago. Kazoos, it turns out, make wonderful geese honks if you just slow them down a bit. I was especially pleased that the songs were used in support of interesting articles--one about a "warbike" in Toronoto, which reprocesses neighborhood field recordings into music as one "rides by", and the other about the great and good things being achieved by African webloggers.

I've always been fond of the ways incidental music is interspersed between pieces on our National Public Radio programs. I'm pleased that in the past several weeks, my own music has been used in both Canadian and Dutch public radio to add the ambience that gives the tiniest nudge of extra fun to the "action" in the aural foreground.

I create Creative Commons music with liberal licenses so that people can find cool uses for it without having to worry about paying for non-commercial uses. I'm thrilled when people pick it up and use it in just that way, as did Spark. It's fun to imagine a song being played in another country, on a Saturday, at dawn, when only people who keep my own hours are awake to hear. 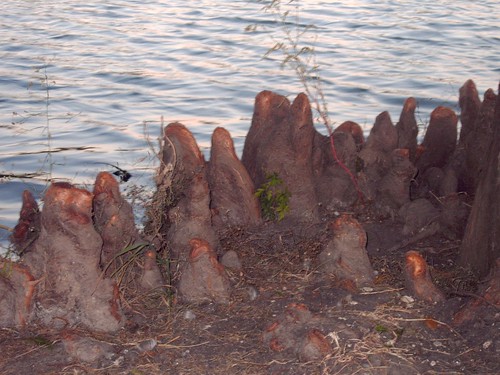 Today we went for oatmeal at Mimi's and then we buckled down to work. I've had various housework projects on my "to do" list for a long time, but the advent of visitors next weekend made progress mandatory.

I took boxes we had procured for the purpose and sorted my books to try to find books to donate to charity. I succeeded in paring the book collection down. I also tackled my "art" room, which has been sadly in need of a major cleaning for months, if not years. My wife tackled other areas, and we together tackled a number of areas. We made very good progress at disposing of things and making the place much better. I'm still not happy with "my" spare room's appearance at all, but it now is merely less than perfectly organized rather than in chaos.

We also got our upstairs common area in good shape, moving furniture hither and thither, and deciding to donate away extra quilts we packratted through my success on some eBay auctions years ago. Quilts hold a special place in my heart, but so does order.

We ate lunch at the new Vietnamese restaurant near us, at which the pho ga' is always dependable. I also had success in figuring out how to get Amazon.com's new mp3 download service to facilitate purchases. I was happy with the ease with which I could buy music without going through itunes. My first two purchases were Dolores O'Riordan's latest album and R. Stevie Moore's cover of Halfnelson's (later known as Sparks) song "Fletcher Honorama". I also loaded my mp3 player with a number of Lisa Debenedictis songs I had already purchased from Magnatune, to give my mp3 player a more pop feel than the ambient/downtempo/chill/noise/experimental bent it usually has these days.

At day's end I went to small Bethany Lakes Park, where ducks swam as sunset set in. It was a day full of solid work, and I'm glad to have gotten so much done.