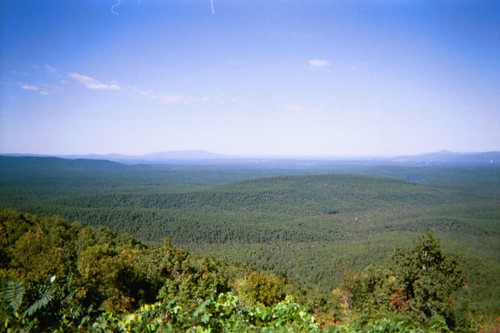 Did you ever look at the far horizon of your life? I don't think I really have looked at mine. On the boundaries, one imagines one can see all sorts of interesting melding of imagery.. The gulf between people can be so great--particularly if one is essentially a Whitsunday archipelago of individuality.

The Kiamichis are small mountains in Oklahoma--pleasantly situated, but a place in which one sometimes feels one has the mountains "all to oneself". I imagine that when you try to meet the folks in the next valley, they may be too busy looking at their own mountains. You imagine that you're part of a dialogue which goes astray, but you're actually many rolling hills from where the action is taking place.

I sometimes think that communication at whatever level of technology is like the old juice can and string telephony. You feel the vibration of a voice on a line, but the words go all astray. At least the view is nice, and the sky can be blue, unless it storms.

I tend to self-doubt and question about failed efforts at communication--but so often one imagines one is the plot, when one is ,like the two plays, merely Guildenstern. The coin flies in the air, and it lands. Then it flies again, and it lands. I can never make heads nor tails of it.

It's amusing, though, to be a character actor in an ensemble film.
Who could ask for more, really?