I dropped the dogs at Pappy's Pet Lodge bright and early this morning. When Bea gave me an imploring look as she was about to be led away, the woman behind the desk (who knows the dogs by name on sight) said "she must be a daddy's girl because she never does this when [your wife] drops them off". My wife and I later laughed at this bit of marketing, and of the notion that Bea imagines herself to be "daddy's girl". But the thought was cheerful, anyway.

After my business meeting in Fort Worth, I had a small space of time before my flight.
I stopped in a chain haircut place. My hair is simple to cut. As I have not been willing to spend an hour drying it since the feathered 1970s, it must be cut into sub-atomic particles, as it is otherwise too wavy. Number 3 shears, which is cut-speak for "ravage my scalp". Today, though, the part on top was left with a kind of 50s crooner wave. Not really my thing, but it'll comb 'round right.

I had a nice pho at a place in Bedford, and made my plane on time. I finished the book about the fellow who lived among near-Amish Mennonites as part of rejecting technology.
I loved the book. I remained nearly entirely unconvinced of the main assault on technology. But it's an interesing paradigm. I still want my internet and my mp3 player and for anti-biotics and small machinery to cure many global ills. But I do wish everyone could feel what I feel when I take a long hike on a prairie trail. I like to imagine that everyone does, in their own way.

I thought about going to see Built to Spill tonight here in Los Angeles, at the Fonda.
But I determined that work and rest dominated, so I instead walked to a sandwich shop in Westchester and had a roast beef sandwich. It was fun being on the part of Sepulveda in which planes fly "this close" overhead.

Tomorrow, I have a hearing, a brief meeting, a flight back, and then I pick up my dogs from Pappy's Pet Lodge, neither of whom is a "daddy's girl". My wife arrives later that night from Boston, and our lives return to a less traveled keel. 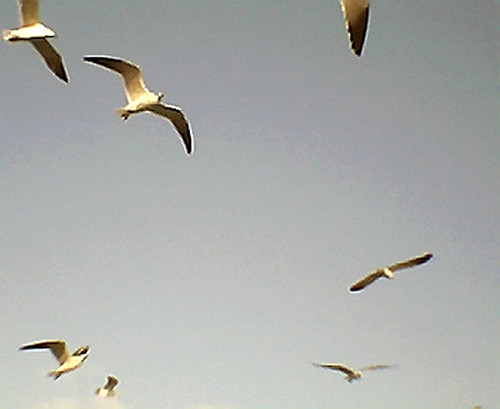 "I hope you love birds too. It is economical. It saves going to heaven".
- Emily Dickinson