When I turned on the side street to try to avoid the flash flood at the corner of Centerville Road and First Street, I thought I'd (once more) found a good way around the flashing lights and delayed traffic.

Soon, though, I realized that the water was getting deeper rather than shallower.
I managed to pull into a driveway. This Dallas County constable who drove the car in the picture chose to drive further, until he could drive no more, and made for this charming picture in the process. I salute his work ethic to take that risk, and his good sense to abandon the risk when it did not pay. As for me, I am perhaps cured of side streets as a solution to flash floods. That thing on the radio about not driving in flood waters? Sadly, true, I think.

The flood receded in about an hour, which I spent productively doing business calls on my cell phone, despite being a little soggy from sloshing in the water. Many thanks to an uncomplaining local resident, who allowed me to borrow his drive until the waters receded. The sight of the local small creek behind his house turned raging river was almost worth being late and soaked.

In other news, my crockpot low-fat brownies were scheduled to finish at 12:30 a.m. Sadly, I fell asleep until 3 a.m. In conventional cooking, this would be a crispy
problem, if not an outright disaster. But in the crockpot, only the outer surface is
overdone. I put the brownies in the refrigerator to cool, and tonight I'll see if I can't use a carving knife to slice away the crust and leave the incredibly moist and tasty brownies within ready to share at work. If they are not salvagable in good order, I'll have no choice but to eat one tiny brownie myself each day. Tonight's crockpot dinner: roasted pork and sauerkraut, with potatoes and local cucumbers.

One might call this a somewhat overdone and all wet day. I call it Monday. 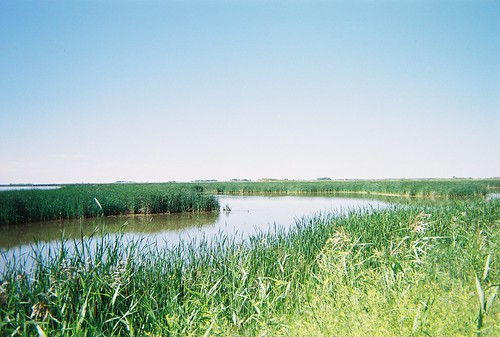 The drive home proved devoid of drama. A new Mexican supermarket opened where the old Mexican supermarket recently closed, so I stopped in to buy things to cook tomorrow. I settled on a can of something called "creole okra", a can of squash, and a can of "pink beans". They did not seem to have whole wheat pita, for which I hanker, a bit, but I'll make do.

When I arrived home, I ate the crockpot roast pork with sauerkraut,
potatoes, and cucumbers. The meal was wonderful--it had a tangy goodness to it without the need for seasoning. The sauerkraut gave the cucumbers the vaguest taste of pickles.

After dinner, I pulled my brownies from the refrigerator and began the task of cullling the good brownie from the over-cooked shell. I ended up with a modest plate of work-ready fudge balls. The one I tried was Heavenly. I hope that my co-workers are as easily amused.

At the market, I bought a bottle of mandarin jarritos, which I will
consume by way of dessert. I have two wonderful siblings, one of whom gave me a Moog video and a thermin video for my birthday. Perhaps tonight is a time for jarritos and synthesizers.