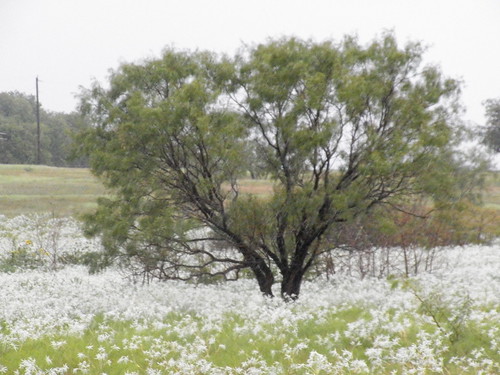 snow on the prairie and a tree, originally uploaded by gurdonark.

Saturday morning I rose early and began to take Beatrice for a walk, only to be thwarted by rain. Then I drove to North Richland Hills, fifty minutes away, for the Many Springs Open 46 Chess Tournament at the public library.I tied for first in the intermediate section, with 2.5/3. My first round opponent, a teen named Isaac, transposed a d4 game into an e4 game when I played 1...Nf6 and 2...d6. I played the Philidor, which was comfortable for me. After he blockaded the position, he sacrificed a rook for two pawns. I held on and beat him. Between rounds 1 and 2, I walked the nearby Walker Creek Trail, where I saw a loggerhead shrike and other birds. In round 2, I played a King's Indian Attack. I won a pawn, simplified into a won knight and pawn endgame, and then lost the pawn through a poor move. My young opponent, Mark, was reluctant to agree to the draw, despite having slightly the worst of a drawn position.
I demonstrated the draw laboriously. In round 3, I dropped an exchange after steering the game into one of those N x e4 pseudo-sacrifices in the Pirc Defense, only to drop a knight fork on a newly-weakened e6. I hung on, though, an exchange down, equalized, and then won when my very polite and sportsmanlike opponent
pushed too many pawns near his king, giving me an opening to attack. My opening plan this tournament was to play Nf3/d3 or Nf6/d6 openings against anything. I was relatively happy with the positions that resulted.
The tournament was very well-run. I hope to return to North Richland Hills again some day.

Saturday night we dined on grilled chicken cooked over charcoals. I also created a song for the Disquiet Junto project 34. Disquiet Junto is a feature of disquiet.com, who organized the Denver concert we attended a week prior. Each week one is set a task to create a song from odd material. This time the odd material was a 14 second bit of broadcasting noise which is the intro to an electronic music show. I took the rather unmelodic sample and turned it into a little song called "Wind-up Sad Clowm".


Sunday morning I took Beatrice for a walk, then went to church, then drove to Hagerman National Wildlife Refuge. I rode my bicycle on the Meadow Pond Trail. I got a good photos of a deer and of the wildflower snow-on-the-prairie. I left when it began to rain. During my trip, I saw great blue heron, little blue heron, a female painted bunting, green heron, great egret, snowy egret, killdeer, and blue-winged teal ducks.

The only irritation last night and today is that Livejournal is loading very slowly for me.